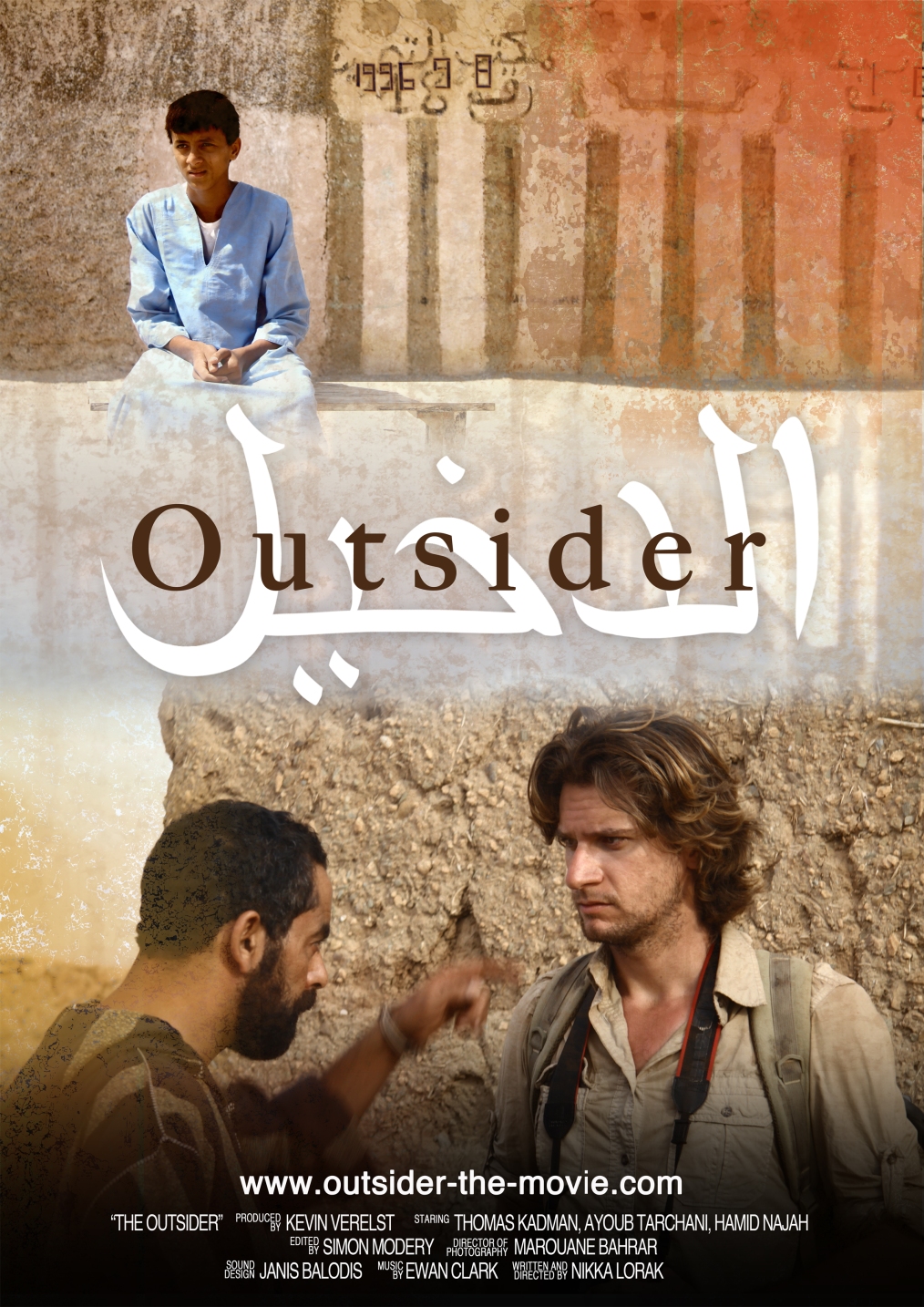 Tagline for The Outsider: “What do you know about the Middle East? Are you sure that you know the entire truth?”

One night in Cannes I found myself meeting a new set of people every thirty minutes. Each group knew of an event happening that night. So I was fortunate enough to find myself traveling from event to event and in one of the groups I met the kind and lively director Nikka Lorak.

I was even more fortunate because I was given the opportunity to see her film. It was very different from the other films I saw in the Short Film Corner. Though many of the films I saw were visually stunning and well-directed, The Outsider told a compelling and complicated story on a very fitting and unique landscape.

In the film, we see what happens when an “outsider” stirs up a small North African village with his visit. At the same time a boy named Mohamed who decides to befriend the outsider, a British photographer, must make a difficult decision. ~The Fine Artist

What was your inspiration for the story of this film? How was the process in getting this story exactly the way you wanted it?

Living in Egypt for more than 5 years, I had observed the lifestyle, which can be fascinating for a European.  It seems that time has stopped there. The modern Egyptian way of living does not differ much from one thousand years back. It lacks modern commodities, but at the same time it reveals a higher degree of human purity and innocence when compared to Western European society. I believed that a rural North African village would be the ideal place for an exotic journey to take my audience.

The Outsider explores universal human topics, which relate to cross-cultural experience: the acceptance of a stranger in the traditional society, the fact that true local life will be always hidden from the eyes of a visitor, unconvertible and dramatic changes that a foreigner can provoke during his brief visit.

Nikka mentions the tagline for The Outsider which is: “What do you know about the Middle East? Are you sure that you know the entire truth?” These questions aptly express the separate cultural universes of the ‘Photographer’ and Mohamed. Nikka continued on:

I have never heard of a script that is screened 100% the way the director wants it to be. In our case, due to production complications (we lost 25% of shooting days), the script was re-written. Initially, it had been two parallel stories of the ‘Photographer’ and the boy on the same events.

This approach would have allowed me to demonstrate that a foreigner does not see the depth of the local culture and subsequently can’t adequately react on the events.

How did you find the actors for The Outsider?

It was not easy. For the role of ‘Photographer’ I casted more than 30 actors and none of them had the classic masculinity which defines such characters as Indiana Jones and Lawrence of Arabia. I was looking for an actor who would bring to life the character of the photographer ̶ “adventurous intellectual”. Finally, I casted Thomas Kadman and he helped me enormously with the character’s development. He was a great person to work with ̶ supportive, professional and very flexible.

As for the role of Mohamed, I had been very lucky. After 3 days of casing on Marrakech, I had seen more than 50 kids and none of them impressed me enough. Suddenly, at the Royal Theater yard, where we had been holding the auditions, I noticed a boy who was sitting on a bench and staring at me with anxious eyes. It was the look of a little wolf. My heart melted.

Apparently, Ayoub Tarchani, already had quite an impressive acting experience. I was surprised because he was equally good in both of the parts, as Mohamed (the good boy) and Yasser (the bad boy). However, my priority was to find the lead and I never regret the choice I made. Ayoub’s performance in The Outsider is outstanding.

Was it difficult to communicate your intentions for the film with your actors?

I had a great understanding with Thomas Kadman, Ayoub Tarchani, Hamid Najah and Waleed Mezouar. Each of them speak either English or French and have enough experience acting.

However, it was quite difficult for me to communicate my ideas to the child actors and the actors playing supporting roles; both for the reasons of the language and lack of acting experience.

I noticed that the main actor, Ayoub Tarchani, who is named Mohamed in the film, is dressed in blue while the other characters are in more muted colors. Did color choice play a significant role in the film and does this choice have any meaning?

Yes, indeed. The costumes and production design were a big part of the subconscious analysis of visual information. Mohamed is wearing blue clothes, which allows him to stand out from the crowd of other kids. It shows that he does not belong to their group. Additionally, blue (cold colour) clothes allow the boy’s figure to stand out in the natural (warm colour) background (sand, stone, wood). Mohamed’s visibility suggests his status as a lead character.

How did you get started in film? Did you learn film because of school or are you self-taught?

After 7 years of experience in stage directing (I had been working for Club Med), I accomplished a filmmaking course with the London Film Academy. This served as a base for my film education. Afterwards, I graduated from a MA directing course in Westminster University.

How many films have you worked on prior to this? What was your role in
these other films?

Prior to The Outsider, I wrote and directed 5 short films and 2 music videos.

Do you have any stories or ideas that you are now in the process of developing for your audience that they can look forward to?

I have many upcoming projects. The first project is a feature length story of The Outsider. For the last few months I had been searching for funds and developing a script. I also work for a TV drama called Dreams and Beyond. The trailer and the treatment will be pitched to BBC. In the meantime, I am planning to produce a few projects because I see myself in the future, not only as a director, but as a producer too.

Link to The Outsider: http://outsider-the-movie.com/

One thought on “The Outsider”